Our guide to the Los Angeles Memorial Coliseum includes information on events, tickets, parking, public transportation, nearby hotels and restaurants, recent renovation, seating and more. Read on to find out how to get the most out of your gameday experience in LA.

The proud and stately Los Angeles Memorial Coliseum has served the sports fans of LA very well over almost 90 years of existence, but with a recent renovation that reduced the seating capacity and added several modern touches, don’t be surprised to find a whole new spectating experience.

The Coliseum is best known as the longtime home of the USC Trojans football team — it was USC that spearheaded and oversaw the renovation — but just about every other team that has played football in LA at some point, from UCLA to the Rams (twice) and Raiders and even the old, Steve Young-led Express of the USFL.

And don’t forget the Dodgers’ three-season stint (1959-61) there after the franchise moved from Brooklyn, and the two Olympics that LA hosted and for which the Coliseum served as the centerpiece. Reminders of the stadium’s Olympic heritage can be found pretty much everywhere you look inside the grand old lady.

Its advanced age meant the LA Coliseum was due for a few changes, and USC, after gaining control over the facility’s master lease, obliged with a two-year renovation. The improvements included the construction of a “Scholarship Tower” (with new luxury suites and a press box), the replacement of every seat in the stadium and the restoration of the famed peristyle on the east end.

With the completion of the renovations in the fall of 2019, the old place got itself a new corporate name (“United Airlines Field at the LA Memorial Coliseum”), a reduced seating capacity (from 93,000 to 77,500) and, dare we say, a spiffy new look. The Coliseum really does have a more modern feel now, and promises to endure as a great place to watch football for years to come.

The NFL’s Rams reaped the benefits for one season, the last of four total seasons they spent in the Coliseum, but they’re headed to the new SoFi Stadium in nearby Inglewood starting in 2020. So the Trojans will have the old place — with its new creature comforts — all to themselves again for the foreseeable future.

One memorable moment at the Los Angeles Memorial Coliseum

Despite so many events over the years, it’s hard not to look at the Coliseum and immediately think of USC’s dominant run from 2002-08. One play can best sum up the Trojans’ swagger during that period: Reggie Bush’s 51-yard touchdown run during a 2005 game against Fresno State, in the midst of his Heisman Trophy campaign (though the NCAA eventually applied asterisks to the Trojans’ accomplishments that season).

The approach: Getting to the Los Angeles Memorial Coliseum

Located a few miles south of downtown LA in Exposition Park, across the street from the USC campus, the Coliseum is centrally located in a dense area of the city. The neighborhood gained a reputation in the 1980s and ’90s as being unsafe, in part because of the 1992 L.A. riots and the problems the city experienced with gangs during that time, but safety has significantly improved since then and incidents during large-scale events at the Coliseum are rare.

Two of the city’s major freeway routes, Interstates 110 (Harbor Freeway) and 10 (Santa Monica Freeway) run nearby, but in an already traffic-heavy city, those routes become even more congested before Coliseum events. That’s especially true for the Exposition Boulevard exit off the 110, the closest off-ramp to the Coliseum/Exposition Park grounds.

Parking around the LA Coliseum is even more of an issue. Though the stadium is surrounded by a few lots and grassy areas where fans can park and tailgate (you can see a parking map here), parking is at a major premium. This really became apparent during the Rams’ recent tenure, as some owners of nearby private lots took advantage of this by jacking up their prices for the first Rams preseason game in 2016.

The major alternative to driving is the Metro rail system — since the Expo Line between downtown and Culver City (later extended farther west to Santa Monica) opened in 2012, Metro has been increasingly popular with football fans heading to the Coliseum. Get off at either the Expo Park/USC or Expo/Vermont stations to access the Coliseum via a short, but often crowded, walk through Exposition Park.

After games, expect about a half-hour wait to board a train, though the crush of fans is typically managed pretty well, with crowd control queues set up along Exposition Boulevard. Metro also offers direct bus service to the 7th Street/Metro Center station, for those headed downtown — the fare is the same ($1.75 as of 2019).

The build-up: Things to do around the Los Angeles Memorial Coliseum

The USC campus comes alive with tailgaters on Saturdays before games. The center of campus near the Tommy Trojan statue and open spaces near several of the campus libraries ranking as popular tailgate spots — so much so that USC in recent years began asking fans to reserve plots in advance for a $20 fee. Get yourself to the center of campus — where the “Tommy Trojan” statue stands — about two hours before kickoff to watch the USC marching band play before it makes its way to the stadium.

Alumni Park, also in the center of campus, is reserved for a free fan gathering area that includes kids’ games and sponsor booths. There is also a sponsored tailgate party held on the east side of Exposition Park, between the Coliseum’s peristyle end and Figueroa Street.

If you’d rather not do that, there are a number of fast-food joints nearby on Figueroa Street and a few more the farther north you go — but the establishments are geared more toward a college community than a sports-fan scene.

For a better selection of bars and eateries, look toward the downtown area and districts such as L.A. Live, across the street from Staples Center. From there, you’re a short Metro ride away, but beware of crowded trains the closer you get to kickoff.

The ambiance: Watching a game at the Los Angeles Memorial Coliseum

After more than 90 years of holding all sorts of events, the LA Coliseum does show its age in parts inside and outside the seating bowl, even after the renovation. If you’re sitting in the lower part of the bowl, you have to pass through long tunnels to get in; if you’re up in the nosebleeds, you’ve got to climb a long staircase to get to the upper concourse (though there are also escalators available), then another trudge up the aisle to get to some of the uppermost rows.

But if you’ve visited before the renovation, you’ll notice a world of difference in some other areas — new paint jobs on the walls, modern TVs in the concourses, handrails in the staircases, cupholders at every (newly replaced) seat, ribbon boards on the Scholarship Tower and at field level. USC has also added mementos to its football program’s history in some spots.

Despite the new additions, the history is part of the reason the Coliseum is worth visiting. If it’s your first visit, definitely spend some time exploring the peristyle end, where the Olympic torch still resides (and is lit up at every USC Trojans game). There are plaques dedicated to the 1932 and 1984 games inside the peristyle, and the well-known nude statues, modeled after two 1984 Olympians, stand in front of it.

The Coliseum’s main concourse is its perimeter, as with so much real estate, the stadium takes advantage by inviting vendors of all sorts to sell their grub. So the food selection is impressive, from food trucks that set up near the peristyle to numerous independent restaurants and caterers that sell out of tents lined up around the concourse. From Greek food to Korean BBQ to wings to ribs to Kettle Korn to cookies — there’s quite a bit to choose from.

Just know, though, that the selection isn’t nearly as close to that wide in the upper concourse (it’s mostly stadium-operated concessions and thus is limited to standard-issue items like hot dogs and popcorn), so if you’re looking for something different, buy your food before you head upstairs.

With such a large seating bowl — the Coliseum was originally designed to hold a track, after all — some sections can be far removed from the action, especially on the stadium’s east end. Also, be aware that with the renovation came a new convention for labeling the seating sections, with numbers in the 100s, 200s and 300s for each ascending tier (instead of a single section number accounting for 90-some rows of the seating bowl).

The aluminum-bleacher seating section in front of the peristyle is largely reserved for the USC marching band, while the visiting fans and band have sections 101-102, 201-202 and 301-302 reserved for them — somewhat behind USC’s band, and yes, it has precisely the acoustic effect that you would think. So if you’re coming to watch the visiting team and would prefer to hear your band play, you may want to angle for tickets in the sections listed above. 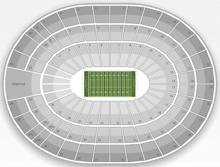