At first glance, there’s not much to love about Tropicana Field, the longtime home of the Tampa Bay Rays.

It’s the majors’ only remaining fixed-dome stadium. It was built before the wave of retro ballparks, and the owners of the Rays have been looking for ways to replace it for years — causing the specter of relocation to hang over the team for years and years. Inside, it’s one of those venues that has too many seats for its market’s demand, thus necessitating the use of tarps to cover a significant portion of its seats. And we mentioned the dome thing, right?

Despite the shortcomings, the Rays have gone to great lengths to dress up the place and make it a more vibrant and interesting experience for the baseball fan. And much of it might amount to putting lipstick on a pig, but there’s still plenty of things worth checking out.

It helps that the Rays have quite often fielded a competitive team despite their small-market status and stadium issues, so at the very least you’re likely to have a good game in store when you visit.

The approach: Getting to Tropicana Field

Tropicana Field is not in Tampa, but in St. Petersburg. Those who have never visited the Tampa Bay region before may not see much of a difference, but for locals it’s a significant one.

The two cities are separated by Old Tampa Bay (the actual body of water, not the region), and even once you make the 6-7-mile drive across it on I-275, you’ve still got another 10 miles or so before you get to the ballpark, just outside downtown St. Petersburg. Talk to a few locals and you’ll find that for many of them (ie. those who live on the Tampa side of the bay), this drive is a major hindrance to their ability and/or desire to regularly attend Rays games.

For the visitor, it can be difficult as well. There is no public transit between Tampa and St. Petersburg; if you want to travel between the two cities without a car, you’ll need to hail a cab or ridesharing service. Even if you’re starting out on the St. Petersburg side of the bay, Tropicana Field can be tough to reach.

For my part, I was staying in downtown St. Petersburg, so one public transit option was available to me: a free shuttle leaving from the intersection of 2nd Street and Central Avenue — look for the Tropicana Field shuttle sign on the east side of 2nd Street, underneath a pedestrian bridge. You’re encouraged to tip the driver, and I gave mine $1 each way, but otherwise it’s a free service. And you might get to ride an open-air trolley, as I did. Either way, it beats trekking a mile through St. Pete in 85-degree heat and humidity.

If you do decide to make the drive to the game, parking is pretty simple. There are a bunch of official stadium lots in the area available for reasonable prices. A little more digging might reward you with a few dollars savings.

The build-up: Things to do around Tropicana Field

St. Petersburg has more than its fair share of cool eateries and bars, many of which cater to the baseball crowd and offer up plenty of specials for them.

You can find most of them downtown, though more and more establishments are appearing closer to the ballpark, which in the past had pretty much been a dead area for businesses. Here’s a guide to restaurants and bars you can try during your visit.

If you’re from out of town and have devoted the day to baseball, it definitely pays to park your car downtown and then take advantage of the free shuttle. You get the whole beach resort vibe of hanging out leisurely somewhere, and then get to watch baseball afterward.

And since going to the game here means spending time indoors, why not spend your pregame time at a picnic table or on a bar stool somewhere, beverage in hand?

The ambiance: Watching a game at Tropicana Field

Tropicana Field doesn’t offer the ideal baseball environment by any means, but as long as your expectations aren’t too high it shouldn’t be a problem. In other words, focus not on what it doesn’t offer, but what it does.

There were long lines for it on the day I attended, mainly because only 50 people at a time are allowed in the area, but if you’re into marine life it’s worth it. It might also be worth it to you to pay the $5 for food to feed the fish, though one Red Sox fan I saw was continually splashed by an apparently happy ray every time she put food in the water, so maybe not.

There are some surprises in the concessions game as well. The outfield concourse is a fan alley of sorts, with sit-down restaurants, arcade games and the like, but you can survey just about all your food options in this area.

One item in particular caught my attention — the Cuban sandwich, which you probably can’t get at any other major-league park (OK, turns out Marlins Park has this, too), You can get it in half and full sizes, and I got a half for $6, and you know what? I’ll put it in the top 10 of things I’ve ever eaten at a ballpark. It was fairly authentic, and pretty darn good.

Other than that, it’s still a dome, with mostly drab corridors and a convention-center feel in the seating bowl. Give the Rays props for maintaining a full dirt infield even with an artificial turf field, but the atmosphere still felt … well, plasticky. And especially in the upper deck, it feels like the facilities need an upgrade. In one bathroom I used, during the seventh-inning stretch rush, the urinals were so close together that, um, let’s just say I regretted my choice of wearing shorts at that moment.

Meanwhile, as you might expect for a Rays-Red Sox game, there was a pretty sizable Boston contingent in the house, but considering the Red Sox were in last place entering the game and had dropped the first two games of the series, they were mostly subdued and deferential. “I’m just hoping we don’t get swept,” two different people told me. But it’s not like they were up against an overly hostile fan base, either. The Rays fans I talked to were pretty laid-back, there as much to enjoy a Sunday afternoon out as to root on the home team. I have to imagine that’s the vibe the team goes for on a regular basis, even with a “Christmas in July” theme they had going on this day (why, I still haven’t figured out) that included team employees decked out in elf costumes and one annoyingly chipper in-game MC talking to the crowd as though everyone in it was under the age of 8.

There’s an intimate feeling to sitting in the upper deck, as I did, as all but the first 10 rows of almost every section were tarped off. While my seat wasn’t bad (the view was very good for an upper-deck seat, actually), the lack of crowd noise felt slightly disconcerting, so I lasted up there all of five innings before heading to the outfield and a more boisterous scene. Picnic tables and accessible alcohol will do that. If you’re just checking out the scene I’d highly recommend you spend some time during the game in the outfield — it just felt more lively. 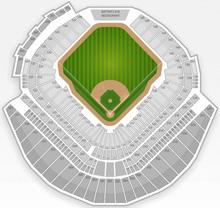