Houston is as spread-out and car-reliant as any city you’ll find in a nation full of spread-out, car-reliant cities, but its downtown is surprisingly walkable and beautiful. I have to think it can owe some of that to Toyota Center, the home of the Houston Rockets. It’s a nice-looking arena that, to its credit, blends into its surroundings rather than sticks out as some behemoth on the downtown landscape.

On Rockets game days it certainly stands out as a hub of activity, but more in the community-gathering sense than the huge-event-with-masses-of-fans sense.

All of that is a long-winded way of saying that Toyota Center just feels welcoming — to the casual fan and die-hard Rockets nut alike. It sure felt welcoming to us when we visited in the midst of a pretty strong season for the home team, and that’s not a bad overarching trait for any building to have, don’t you think?

For more on visiting Houston, check out our Houston city guide.

The approach: Getting to Toyota Center

Toyota Center, as mentioned above, doesn’t really stick out amid all the tall buildings of downtown. That’s OK, because it’s still rather easy to find, nestled next to a big Hilton hotel and down the street from a GIGANTIC convention center and a beautiful little park with a pond in the middle.

One option for getting to the arena is light rail, which cuts through downtown and stops several blocks away (get off at Bell). From what we’ve seen and heard, light rail is still a new concept to most Houstonians, as the system is not yet 20 years old, but it is expanding and promises to go to more and more parts of the city over time. That’s good, because downtown is far from the only area of Houston where out-of-towners might stay.

For drivers, downtown itself is literally surrounded by freeways, so the driver shouldn’t have too much trouble finding it. There’s a pretty big parking structure across the street from the arena and many more parking lots a little farther out that also serve the nearby convention center as well as Minute Maid Park, some 4-5 blocks away.

The build-up: Things to do around Toyota Center

An hour and a half before game time, hundreds of fans were already clamoring to get into the arena. Perhaps it was due to excitement over the Rockets on this particular day, which is nice, but we didn’t exactly see a ton of eateries and watering holes surrounding the building. A few blocks away there were more choices, but they looked to be of the quick-eating variety, and many were closed anyway.

Then again, it was a Sunday downtown, with no 9-5 workers around. So, figuring the die-hards knew something we didn’t, we chose to head inside.

The ambiance: Watching a game at Toyota Center

Toyota Center is quite beautiful inside, with several glass atria and tributes to Rockets past and present in a few different spots. It’s worth a walk around the main concourse to see what’s there, but you’ll quickly find a good number of areas that are inaccessible to the common fan — the seating areas on both sidelines are premium areas, each with a club that has a guarded entrance.

So of course, we steered clear of those areas and headed to the upper concourse, which is more our cup of tea. Not surprisingly, it’s more the cup of tea for most families, and the arena recognizes that by having a pretty big arcade and play area at one end of the concourse. It seemed like most of the fans with seats in the upper deck were spending their pregame idle time there, since the upper deck was largely empty until the last few minutes before tipoff.

Our examination of the choices available at concessions revealed nothing special. But the arena has been working to upgrade its options in recent years, adding such items as Texas Fried Rice, quesadilla dogs and an assortment of adult (re: alcoholic) milkshakes.

I chose to go down to my seat, in the first row of Section 424 (it pays to be a single sometimes), and I found the floor flooded with a spilled red beverage. Not surprisingly, next to my seat was a family of two boys and a flustered-looking parent (or grandparent, but I don’t want to speculate) sitting on the other side of them. She immediately apologized and suggested I sit a seat over until her husband could return with paper towels, though with maybe 15 minutes left before game time, I didn’t know who would arrive first — the husband or the fan sitting in the seat I now had to occupy. Five minutes later, I got a tap on my shoulder and a polite request to please vacate “my seat,” so I had no choice but to put my feet in the red beverage until the husband returned with the paper towels (which, not surprisingly, were not nearly enough to sop up what was there).

Other than that, and other than the narrow pane of glass that impeded my vision of the court when I sat back in my chair, my seat was great. And even if it wasn’t, well, there’s that giant scoreboard to help you out. This was my first time in an arena with one of these behemoths, and I have to tell you, it’s hard not to fixate on the scoreboard rather than the court.

As the guy whose seat I occupied temporarily (who also was a dead ringer for I-Fan Friend J-Park expect for the fact that he said “golly” in practically every sentence — we were in Texas, after all) said at some point, “Why watch the game on the court when you can watch the screen?” 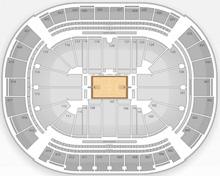