Boston’s TD Garden, home of the Celtics and Bruins, is more than 20 years old now, having opened at the dawn of the most recent wave of arena construction in American sports.

And it has held up well — walking around it, you probably couldn’t tell it’s that old, at least in comparison to some of the newer arenas out there. Add in the recent success of its primary tenants, each of which have won a championship in the last 15 years, and the building has a nice bit of history to go along with its modernness.

The only time you’ll question its adequacy is if you start talking to old-timers who remember the building it replaced. The old Boston Garden, which stood right next to where TD Garden is now, was the site of many memorable sports moments before it was demolished in the mid-1990s.

The new arena might not be as lovable, but at least it’s more comfortable and spacious, especially on the frigid night that we visited to check out the scene.

For more on visiting Boston, check out our Boston city guide.

The approach: Getting to TD Garden

TD Garden is one of those arenas that has had several names over its history, most notably FleetCenter and TD Banknorth Garden, so don’t be surprised to hear locals refer to it simply as “the Garden.” The building occupies a prime spot of land in the famed North End, right by the distinctive Bunker Hill Bridge (if you’ve watched a TV broadcast of a Bruins or Celtics game at TD Garden, chances are they used a shot of the bridge at some point).

That bridge is part of Interstate 93, which runs through the heart of the city (and under it thanks to the “Big Dig” project of a few years back), so highway and road access to the arena is quite easy, and there’s a large parking structure adjacent to it. But be warned that Boston is a notoriously intimidating place to drive in, especially if you’re not a local.

Fortunately, the arena also sits directly over North Station, a hub for both the subway and commuter rail. If you use the latter, you won’t even have to step outside — you just take an escalator up one level to reach the arena’s ticket-takers. The MBTA subway, known commonly as simply “the T,” also stops at North Station but you’ll have to step outside and walk a short distance to get to the arena entrance (at least, that was our experience). The Green Line, which runs from such tourist-friendly areas as Back Bay and Boston Common, stops at North Station.

If you happen to already be in the North End, just walk. And yes, this is what we did despite the single-digit temps on this particular night. Because of the Big Dig, there’s a large stretch of parkland that cuts through the North End, leading north to the arena. It’s a very pleasant walk during the summer, when you’ll see folks picnicking on the grass, but on this day it was just a matter of dodging snowbanks with the other pedestrians who were all walking as fast as humanly possible.

The build-up: Things to do around TD Garden

One advantage to walking is that you’ll see all the bars and restaurants lined up on the streets just south of the arena, beckoning sports fans to come in out of the cold. And there are quite a few of them, but being the vibrant neighborhood that it is, you get the sense that there doesn’t have to be anything going on at the Garden to have a reason to go in.

The Four’s, Boston Beer Works, West End Johnnie’s and Porters are just some of the establishments in the area offering bar grub, huge beer selections and about a gazillion TVs, and of course they’re chock full of Bruins or Celtics fans depending on the event.

It being the North End, home to a prominent Italian community, you’ll find any number of Italian restaurants a little farther away as well. And if you’re willing to venture a bit farther than that, you’ll hit Boston Harbor and a range of seafood restaurants, many of which offer that most delectable of Boston eats, the lobster roll.

The ambiance: Watching a game at TD Garden

With so much outside, it might take you a little while to get inside TD Garden. But it’s worth going in a little early to see what the arena has to offer as well. It doesn’t look like much from the outside — indeed, it looks mostly like one big concrete slab — but the inside is plush and spacious and full of things to see, thanks in large part to a recent renovation.

Once you get your ticket scanned, one of the first things you’ll come across is the pro shop for both the Bruins and Celtics, on the second level. Strangely, though, it’s also accessible to people who aren’t going to the game as well, necessitating that people who ARE ticketed get their tickets marked so that they’ll be allowed to stay in the arena once they exit. A strange arrangement, for sure, but we made it through without a problem. From there, it’s another two levels up via escalator to reach the main concourse.

From a concessions standpoint, you’ll find a pretty good array of options, including the usual staples — burgers, hot dogs, sausages, pizza — and a couple bars with an impressive selection of beers. You’ll also find the aforementioned lobster roll on sale for $16, which is about par for the course if you were buying it somewhere else (though depending on the place you choose, it’ll likely be bigger).

There’s nothing real distinctive about the seating bowl — two general levels with a club level in between, like many other arenas. My seat was halfway up in the upper deck, known as the balcony level, and the view was just fine, not too high. Up there you have a clear view of all the Bruins and Celtics banners that hang from the rafters, as well as the new center-hung HD scoreboard, at least. 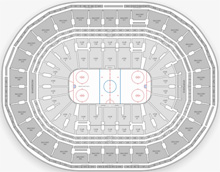