Our guide to T-Mobile Arena in Las Vegas includes information on events, tickets, parking, public transportation, nearby hotels and restaurants, seating and more. Read on to find out how to get the most out of your gameday experience.

Despite its worldwide reputation as a premier gambling, entertainment and events destination, Las Vegas filled a big void in 2017 when the NHL expansion Vegas Golden Knights, began play at T-Mobile Arena. The Golden Knights are Vegas’ first major professional sports team, but in some ways it felt like Sin City had been ready for a team to call its own for a long time.

As it turned out, Las Vegas residents needed something other than the Strip and casino gambling to show pride in their city. That certainly played out beyond the city’s wildest dreams in 2017-18, when the Golden Knights kicked off their existence by winning again and again. They took fans on a wild and exhilarating ride through their inaugural season — one that led all the way to the Stanley Cup Final.

It should also not be understated the role the Golden Knights played in helping the city heal after the Route 91 concert shooting on October 1, 2017 — just days before the team’s inaugural game. A tribute to the shooting victims continues to display at the arena.

Once you check out the arena the Golden Knights call home, you can see just part of the reason why the locals are so excited. In T-Mobile Arena, just off the Strip and near one of the city’s busiest intersections, Vegas has a first-rate facility that measures up with some of the best buildings in the NHL.

When there’s no hockey going on, T-Mobile Arena gets plenty of use as the home of big-time boxing and mixed martial arts events, college basketball (the Pac-12 men’s basketball tournament is held there every March) and many more events.

And when the NFL’s Raiders complete their plan to relocate to Vegas — they’ll be moving into the new Allegiant Stadium, across the freeway, in 2020 — T-Mobile Arena may be looked upon a few decades down the line as the building that brought Vegas into the big-time as far as pro sports is concerned.

One memorable moment at T-Mobile Arena

Though the Golden Knights proved to be an NHL contender from the beginning, their first-ever regular season home game will remain a powerful memory. Played less than two weeks after the Route 91 concert shooting, the team honored first responders from that day, then went on to an inspired victory over the Arizona Coyotes.

The approach: Getting to T-Mobile Arena

While directions are certainly useful in Las Vegas, when it comes to attractions on the Strip it’s more helpful to mention where they are in relation to nearby casinos. So with that in mind, T-Mobile Arena is behind New York New York and near the Monte Carlo.

But if you’ve never been to Vegas, you might not have a sense of where either of those two are, so make your way to the intersection of Las Vegas Boulevard (aka the Strip) and Tropicana Avenue, where four of the most prominent casino/hotels reside: the MGM Grand, New York New York, the Tropicana and the Excalibur. Then head west on Tropicana to find the arena, nestled between New York New York and Interstate 15. In fact, if you’re heading to the arena on I-15, it won’t be difficult to spot.

Keep in mind, though, that traffic for arena events will back up near the Tropicana Avenue exits in both directions. And parking appears to be just as difficult; Vegas casino patrons are used to free parking, but the three closest structures (at New York, New York, Monte Carlo and Aria) are each charging $20 for arena events. You can purchase parking in advance and save $10, but if you’d rather not pay, consider parking at a farther-away casino and walking.

Really, walking along the Strip or through casinos isn’t exactly an undesirable alternative. It’s difficult to get lost, anyway, since there are numerous signs pointing you where you need to go. T-Mobile Arena directional signs become more frequent the closer you get, but in general, follow the signs to either New York New York or Monte Carlo to stay on the right track.

The build-up: Things to do around T-Mobile Arena

Along the Vegas Strip, they make it really, really easy for you to find something to do, no matter what your tastes may be. Casino gambling, of course, is prominent among your options, and you have three major casinos at your disposal without having to cross a major street. (Spoiler alert: Though you can find slot machines at some really random spots in this city, including at the airport and in some restaurants and drugstores, there aren’t any inside T-Mobile Arena).

But you’ll find plenty of traditional pregame entertainment as well. Along with T-Mobile Arena, a small district alongside New York New York called “The Park” was built that includes a very large brewpub with outdoor seating called Beerhaus and several eateries, including a Shake Shack. If you’re walking toward the arena from the Strip, you’ll likely have to pass through it, making it very popular for sports fans.

And the number of restaurants and bars within a half-mile radius are, quite frankly, endless considering the number of high-profile casinos around, and many are crowded whether there’s an event going on at T-Mobile Arena or not.

Vegas can be notoriously difficult on the wallet, but most nearby casinos have mall-style food courts if you’re looking for budget options. New York New York’s happens to be close to the exit leading to The Park, and thus to the arena itself.

The ambiance: Watching a game at T-Mobile Arena

When you arrive for a T-Mobile Arena event, start by going through the Toshiba Plaza on the arena’s east side, facing the casinos and the Strip. In fact, unless you have VIP tickets that allow you to access a pair of exclusive side entrances, you’ll have to go through the Toshiba Plaza, because that’s where the only public entrance to the arena is. Luckily, it’s fairly wide and has a large enough number of turnstiles where you won’t be waiting too long to get in.

Once inside T-Mobile Arena you’re on the event level and have to ascend an escalator or stairs to get to the main concourse, which is decorated almost exactly the way you would expect of an arena in Las Vegas: Neon hues, bars at practically every corner, gaudy displays and, in some spots, large windows looking out onto the city.

There are two lounges on the main concourse and another one above the upper seating level, with the latter, called the Hyde Lounge, helping constitute the most striking and unique feature of the arena: Two balconies jutting out above the seating bowl, fashioned to look like glaciers.

Beyond that, T-Mobile Arena’s seating bowl is pretty standard stuff as arenas go, with two levels of seats and a suite level in between. In fact, the upper level is shaped like a horseshoe rather than an oval (which makes the building better suited for concerts), so you’ll have to pay close attention which section you’re in because you can’t walk all the way around.

In the place of that missing chunk of upper-level seating sections is a giant mural of the Strip, which is a nice thing to look at when you’re not watching the game — though you’ll definitely want to pay attention to that part of T-Mobile Arena just before puck drop, as the Golden Knights have already gained a reputation among hockey fans for their gaudy, eventful pregame presentations.

But with good sight lines throughout the seating bowl and a state-of-the-art scoreboard in the middle, T-Mobile Arena offers an event spectating experience that measures up well with most of the newer buildings around the NHL.

You won’t find anything too adventurous among T-Mobile Arena’s food selections, though you’ll see quite a few brand names. Shake Shack and Pink’s Hot Dogs are among the purveyors operating stands there, and you’ll find deli sandwiches, pizza and barbecue among the many options. 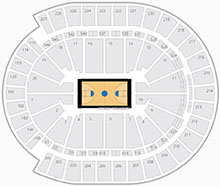