SunTrust Park in Atlanta, Major League Baseball’s newest ballpark, is in many ways a continuation of the advancements made in stadium experiences over the last two-plus decades of the venue building boom. Inside and out, it’s equipped with all of the modern creature comforts fans have come to expect in their live sports experience, and also contains a few little surprises.

But in some ways, it also bucks convention. Instead of the downtown/central city location most franchises crave for their new venues, the Braves chose to build their new ballpark in what is decidedly the ‘burbs — its Atlanta mailing address notwithstanding.

In the process, they ditched Turner Field, their home for more than 20 years, claiming that they were moving closer to their fan base’s geographic center while giving themselves more control over development in the surrounding area.

Credit to the Braves for creating that baseball-friendly environment and giving people a reason to stick around before and after ballgames, stay for a number of days and, yes, even live nearby. For the visiting fan, it does create some challenges in checking SunTrust Park off your list — namely, in terms of getting to and from the ballpark, which we’ll explore below. Know, though, that going to a game is definitely worth the trouble.

For more on visiting Atlanta, check out our Atlanta city guide. 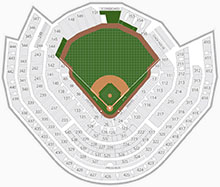