On the western edge of downtown Atlanta, there’s much to do within a relatively small area, but NBA basketball fits in nicely amid the hustle and bustle. The hometown Hawks play at State Farm Arena, one of the centerpiece buildings of this area.

The arena is instantly recognizable by the exterior facade of steel beams arranged to spell out “Atlanta,” in case you needed another reminder of where you are.

The Hawks are joined at State Farm Arena by the WNBA Dream, and for a while shared the building with the NHL’s Thrashers, who eventually moved to Winnipeg. The Thrashers were synonymous with futility during their tie in Atlanta, while the Hawks have enjoyed only sporadic success since moving in — which means the building hasn’t quite yet become a destination in the minds of many sports fans.

But both inside and out, State Farm Arena — formerly known as Philips Arena until a 2018 name change — offers a lot for both the visiting sports fan and the Atlanta sports nut.

For more on visiting Atlanta, check out our Atlanta city guide.

The approach: Getting to State Farm Arena

State Farm Arena’s prominent spot in downtown Atlanta, in what’s known as the Centennial Park District, means there are many ways to get there and many parking options nearby — and of course, with it you’ll encounter plenty of traffic no matter which direction you’re coming in from. A common approach is to come through downtown, coming off one of the exits from nearby Interstate 20 or I-75.

Atlanta’s MARTA subway system has a stop right at the arena, which has the cumbersome name “Dome-GWCC-Philips Arena-CNN.” The station has an entrance just outside the arena’s southwest corner, accessible via a staircase.

For drivers, there are numerous parking structures in the area immediately surrounding the arena, owing to its location near the Falcons’ Mercedes-Benz Stadium and the Georgia World Congress Center, as well as many other prime Atlanta attractions — see below for more on that.

The build-up: Things to do around State Farm Arena

Much of Atlanta’s sports heritage lies in and around the arena. Mercedes-Benz Stadium lies to the west; Centennial Olympic Park, the city’s most prominent reminder that it hosted the 1996 Summer Olympics, is to the east; and the College Football Hall of Fame is in a building a block to the north.

So there’s much to see before and after the game — and that’s before mentioning the many non-sports attractions in the vicinity: CNN Center, the Georgia Aquarium, World of Coca-Cola and more.

If you’re looking for a quick bite to eat before the game, the CNN Center has a food court on the ground level (as well as direct access to the arena after that). But if it’s something more substantial you want, or if you want that sports-bar atmosphere, it’s worth it to venture a few blocks to the east for more options — from chains such as Waffle House, Hard Rock Cafe and Hooters to independent establishments.

A partial list of restaurants in the area can be found here.

The ambiance: Watching a game at Philips Arena

With so much surrounding it, you can access State Farm Arena from many levels, from the MARTA station to the CNN Center Food Court to the two-level Taco Mac restaurant attached to the arena to the pedestrian bridge that connects the arena to the CNN parking structure across Centennial Olympic Park Drive.

Depending on where you’re coming from and where your seats are located, you might want to scout out the entrances to make sure you’re not doing too much scurrying around, but then again, it doesn’t hurt too much to explore, either.

That’s not the only quirk the Hawks’ home has. You’ll also notice the seating bowl is unusual in that three levels of luxury suites are stacked on one side, leaving a three-sided upper level (you can also see this architectural approach in action at Levi’s Stadium, home of the NFL’s San Francisco 49ers).

After that, it’s your standard-issue NBA spectating experience, which isn’t a bad thing at all. The arena’s listed capacity is 21,000 but the recent renovation actually reduced the number of seats, and the seating bowl doesn’t feel cavernous except in the uppermost reaches.

Upcoming Events
All times local
Feed The Streetz with Rick Ross and Yo Gotti and DJ Drama and T.I.
Friday, July 17, 2020
7:00 pm
Get tickets at SeatGeek » 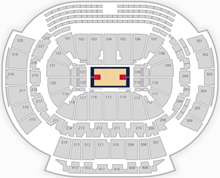