If you’ve never been to Vancouver (and if you haven’t, what the heck are you waiting for?), you may find yourself surprised to see just how vibrant it is, especially in its downtown core. Rogers Arena, home of the Vancouver Canucks, plays a prominent role in this vibe.

Tall buildings abound, including numerous residential high-rises, and the streets are teeming with pedestrians during the waking hours. And all of this hustle and bustle is surrounded by unmatched natural beauty thanks to the nearby bodies of water and the mountains in the distance.

So with all of that at your disposal, why would you want to go inside to see a hockey game? Well, this is Canada, of course, and that’s what the locals do. Also, it’s known to rain a lot around these parts.

But really, the city’s hockey culture is worth experiencing. Vancouverites love their Canucks, even if the team has yet to deliver a title despite a couple close calls over the years, and there’s no better way of observing this relationship than seeing a game at Rogers Arena.

On a rainy day in December, Mrs. Fan and I capped off a day of sightseeing by heading indoors to watch a Canucks home game.

For more on visiting Vancouver, check out our Vancouver city guide.

The approach: Getting to Rogers Arena

Rogers Place, formerly known as General Motors Place, sits in the eastern part of downtown Vancouver, near the city’s very large Chinatown. Downtown is pretty big as far as walking distances are concerned, but if you can handle a walk of a mile to a mile and a half (or, keeping with the Canadian convention, up to two kilometers), then you can probably just hoof it from most hotels within the downtown area. From where we were staying, a few blocks from the Canada Place convention center, it turned out to be a stroll of about 20-25 minutes.

If you approach from the center of downtown (ie. from the west), you may have a hard time locating it — that’s because the arena is obscured by a number of nearby tall buildings, including one that’s being constructed practically right over it. That was certainly the case as we were walking east on Georgia Street, one of downtown’s main drags.

If you’re on Dunsmuir Street, which passes the arena’s north side, you can spot it a little better, but a network of bridges and all the tall buildings still makes it more difficult than it might seem. If you can’t tell where the arena is, try instead to spot the distinctive roof of the larger BC Place stadium, which is right next door.

Oh, and if you’re not interested in walking, you’ve got an alternative: Vancouver’s SkyTrain system, which was expanded for the 2010 Winter Olympics and thus runs to many different parts of the city. The lines are somewhat disjointed, though, so you’ll have to pay close attention to the line that you’re on. The Expo and Millennium lines run right by the arena via the Stadium-Chinatown stop — it’s a quick two-stop jaunt from the Burrard station, the closest stop to the downtown center. If you’re on the Canada line, you can either get off at Vancouver City Centre and walk about half a mile (a straight shot down Georgia Street) or continue on to Waterfront, where you can transfer to the lines that’ll take you to the arena’s doorstep.

The build-up: Things to do around Rogers Arena

It being downtown, there are all sorts of options for pregame eating, drinking and general hanging out. The closest ones are just north of the arena in Chinatown and a few blocks away in Gastown. But if you’re looking for a hipper vibe, start off a little farther away, either in Yaletown (south of BC Place) or on Robson Street downtown, both of which boast an abundance of restaurants and bars.

You’re almost sure to see a few folks in Canucks jerseys spending their pregame time in those spots as well, and you can follow them either by foot or train to the game from there.

Or you can do what myself and Mrs. Fan did, and hang out at Tim Hortons. If you’re not Canadian, it’s something you’ll want to do at some point during your visit anyway. Trust me.

The ambiance: Watching a game at Rogers Arena

Considering its setting among tall buildings, you might think that Rogers Arena is a pretty big venue. Really, it’s pretty intimate — at least more so than most of the NHL venues I’ve seen to date. For me, the biggest tell was that our seats were in Row 11 of the upper deck, just three rows from the top, and the view felt like we were right on top of the rink — or, at the very least, much lower than Row 11 of the upper deck would suggest. In other words, a good view of the game was not in question.

Just beyond the last row of the upper deck is a sit-down restaurant that looked pretty exclusive, and the people I saw in there looked like they were having a fine time, so I’m guessing the view wasn’t an issue for them either.

Part of the illusion regarding its size stems from how you get inside. If you go in via Georgia Street, as we did, you wind up on an elevated bridge, and the entrance on that side actually leads to the upper concourse. On the other side, via Dunsmuir, you’ll have to climb a staircase to access the entrance gates. So you’re already getting a bit of workout before you even go in, and that naturally creates the expectation that you’ll be pretty high up once you get to where you’re going. At least, that’s my theory.

Anyway, there’s plenty to check out once you’re inside. The arena’s biggest claim to fame to date is that it hosted the gold-medal hockey game in the 2010 Olympics, which of course Canada won, and there’s a display dedicated to the game that includes a monitor showing the overtime period on a continuous loop (even as an American who was pretty crushed by the loss, I thought it was a cool exhibit to see). There’s also a Canucks Hall of Fame and a pretty big kids area, where we stood for a while watching an adult going to town on a shot-accuracy game.

Before going to the game we were tipped off to the presence of a made-to-order mini-donut stand somewhere in the arena. We stumbled upon it, called Cin City, on the main concourse, and it was certainly worth seeking out. We bought the more expensive option, the “Canadian” — donuts drizzled with bacon bits and maple syrup — and oh my goodness, it was tremendous. It worked as a full meal for us, but maybe it’s a nice dessert for you. Either way, definitely worth trying.

The Canucks do a great job with their pregame theatrics, with a video projected right onto the ice and screens lowered to ice level for greater visual effect. As for the rest of the game, there wasn’t a whole lot for the home fans to cheer about, as their team got shut out by the Stars.

The people around us were pretty chill about it, though — one made me laugh out loud in the third period by screaming out, “C’mon you stupid hosers, let’s get a goal!” — and as a whole were quite entertaining to be around. So if your main impression of Vancouver fans is built around what happened when the Canucks lost in the 2011 Stanley Cup final, know that there’s a lot to more to the hockey experience in Vancouver than that, and it’s certainly worth seeing for yourself.

The Lumineers with Gregory Alan Isakov
Tuesday, September 8, 2020
7:00 pm
Get tickets at SeatGeek » 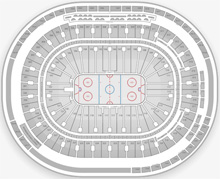