Our guide to Progressive Field in Cleveland includes information on events, tickets, parking, public transportation, nearby hotels and restaurants, seating and more. Read on to find out how to get the most out of your gameday experience.

Progressive Field, home of the Cleveland Indians, occupies a special place among major-league ballparks, as it was at the forefront of the retro-ballpark movement back in the early 1990s and has still maintained its uniqueness over more than 20 years of existence.

The former Jacobs Field (many Indians fans will still refer to it by its old nickname, “The Jake,” even though the corporate takeover of its name has been in place for many years now) definitely has its charms, from the toothbrush-like light towers to the “Little Green Monster” left-field wall to the view of the downtown skyline.

And whether the Indians are in contention or middling along, Progressive Field remains one of the best places to take in a major-league game. It has seen plenty of significant events over the years, from three World Series (none of which resulted in a championship for Cleveland, though) to two MLB All-Star Games and a long sellout streak.

Tickets are easier to come by these days, but Progressive Field remains an ideal place to catch a game. Its location in central Cleveland, coupled with the experience of watching a game, will keep it high on the list of top major-league parks for years to come.

For more on visiting Cleveland, check out our Cleveland sports travel guide.

One memorable moment at Progressive Field

The Indians have reached the World Series three times since moving into what is now Progressive Field. But for a singular moment, let’s look back at a regular-season game. On August 5, 2001, the Indians erased a 14-2 deficit to beat the Seattle Mariners 15-14 in 11 innings. It remains tied for the largest comeback in MLB history.

The approach: Getting to Progressive Field

Progressive Field occupies its own little corner of downtown Cleveland — the southwest corner, to be specific — right along Interstate 90 as it begins to wind through the city center. Interstates 77 and 71 also run nearby as they flow into downtown.

Drivers on I-90 traveling in either direction can exit at East 9th Street, at which point the ballpark will be clearly visible. From there, a number of surface parking lots line both Carnegie Avenue and Ontario Street, which intersect in front of Progressive Field’s home plate gate.

The Gateway East Garage, behind Progressive Field’s left-field stands (and attached to the ballpark by a pedestrian walkway), and adjacent to Rocket Mortgage FieldHouse, is the most obvious parking spot in the vicinity, but it’s mostly limited to season-ticket holders.

There are numerous lots in the surrounding blocks, though, with rates ranging from $5 to $20. The usual rule applies: The closer to Progressive Field the lot is, the more expensive the parking rate will be. You can find a parking map here.

One option you might find viable depending on where you’re staying or coming from is light rail — the closest stop to the ballpark is about three (long) blocks away at Tower City-Public Square. If you’re visiting Cleveland and staying in a downtown hotel, you’ll probably find walking to be more convenient — most of the major hotels are within about a mile of Progressive Field.

The build-up: Things to do around Progressive Field

If you’ve never been to Cleveland, you might find yourself surprised by how vibrant the downtown area really is, especially when one of its sports teams is doing well. There’s usually plenty of foot traffic, though for the most part it’s to be found north of the ballpark, as that’s where the restaurant and nightlife district can be found.

For good places to hang out and eat/drink, head a couple blocks north to Prospect Avenue, which is lined with establishments that cater to the sports crowd. (There’s also a casino in the area called the Horseshoe, just on the other side of Rocket Mortgage FieldHouse, if that’s your thing.)

An even better spot for restaurants and people-watching is East 4th Street, an alley that’s closed to vehicles but full of eateries and bars. It’s just a two-block walk away from Progressive Field and very close to most of the hotels that are convenient to the ballpark. The proximity means you can spend extra time there before making a brisk walk over to the game.

For more well-attended games, typically on Fridays and Saturdays, the Indians will open up “Rally Alley,” a street festival along Larry Doby Way behind the left-field stands.

The ambiance: Watching a game at Progressive Field

As much as there is to do near the ballpark, this is definitely one of those times where you want to go in as early as you can and see what there is to offer, especially if it’s your first visit.

A good starting point would be Gate A, the side of the ballpark that faces Rocket Mortgage FieldHouse and opens up to left field. From there, check out the many murals and photos celebrating the Indians’ history (though it isn’t necessarily a winning tradition — the Indians haven’t won the World Series since 1948 — a LOT of great and significant players in baseball lore have played in Cleveland).

And if that’s your thing, make sure to head toward center field, because Progressive Field has a beautiful section called Heritage Park that was built expressly to celebrate its great players and history.

If you’d rather just stroll around, though, there’s lots of room to do so on the main concourse. Not only can you stand behind the main seating bowl and watch the game if you so chose, there’s another concourse farther back, separated by concession stands.

Most of Progressive Field offers good sight lines, but if you’re going for atmosphere, you might want to start by seeking out a spot in the left-field seating area. It’s bleacher seating, but typically the rowdiest of Indians fans sit there, as does the devoted fan who comes to Progressive Field to bang a bass drum at every game.

Back in the days when the Indians were selling out 455 straight games at the Jake, spots in left field (and everywhere else in the ballpark) were pretty hard to come by. The Indians pay tribute to the fan loyalty of this time by hanging the number 455 along with their retired numbers in right field.

Before heading to your seating area, make sure to walk around Progressive Field a bit to survey your food options. The Indians have done a terrific job highlighting the cuisine of Cleveland (which in our view is pretty underrated and has more than a few items that visitors should find worth checking out), and this is apparent just by seeing what’s available to you. If you’re from out of town you won’t recognize many of the stand names, and that’s a good thing.

Head to the Infield District to check out loaded hot dogs from Happy Dog, burritos from Ohio City Burrito and Fat Head’s Brewery, known for giant sandwiches as well as beer. You can also find a beer garden featuring Great Lakes Brewing Company offerings on the ballpark’s third-base side. 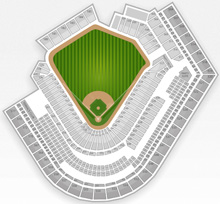