Our guide to Petco Park in San Diego includes information on events, tickets, parking, public transportation, nearby hotels and restaurants, seating, food and more. Read on to find out how to get the most out of your gameday experience at the Padres’ home stadium.

Take in a game at Petco Park and you’ll quickly find that the experience — from the atmosphere to the seating to the food — is a little bit different than many other ballparks in Major League Baseball.

In San Diego, known as “America’s Finest City” and with good reason, watching live sports in general has a bit different vibe than in most other cities. Visitors are quick to notice that residents of San Diego are a little more laid-back, and why wouldn’t they be? With nearly perfect weather most of the year and fine food, picturesque beaches and so much more at their disposal, you can forgive them if sports fandom isn’t on their mind all the time.

When they have reason to be, though, San Diegans can be just as spirited as any other sports fans. The hometown Padres don’t often give them reasons to flock to the stadium, with no championships and just two World Series appearances to their name. But they do have a spectacular ballpark in the heart of downtown San Diego, and Petco Park often gets mentioned as one of the finest in all of MLB.

Petco Park is really worth visiting as much for what’s inside it as what surrounds it, as it boasts several features unique among major-league ballparks — the Western Metal Supply Building in left field being foremost among them.

Though it has been a few years since the Padres have been a playoff contender, as of 2017 they’re all San Diego has in terms of major pro sports after the Chargers left Qualcomm Stadium and headed north to Los Angeles. That may be good enough to bring more fans back to the ballpark.

One of my recent visits to Petco Park came when the eyes of baseball fans everywhere were on San Diego for the 2016 All-Star Game. We’re not sure Petco has ever looked better.

One memorable moment at Petco Park

Though the Padres have struggled to find success over the years, including their time at Petco Park, they can at least lay claim to one of the most accomplished closers in major-league history. In 2006, Trevor Hoffman recorded his record-breaking 479th career save in front of the home fans at Petco.

The approach: Getting to Petco Park

Downtown San Diego is a beautiful spot and going through constant improvements, full of things to do for adults and children, residents and tourists alike. Petco Park is right in the middle of all that action, alongside the city’s famous Gaslamp Quarter, near the Convention Center (which each summer hosts the uber-popular ComicCon), and within walking distance of many hotels, high-end lofts and more.

If you’re visiting the city, a downtown hotel offers the perfect convenience (one, the Omni San Diego across the street, is attached to the park via pedestrian bridge). But know that downtown hotels can be pricey, especially when big events such as ComicCon are happening.

If that’s the case, staying outside downtown and coming in via public transit is certainly viable. The San Diego Trolley, the city’s light rail system, runs to many points outside downtown worth visiting, such as Old Town and Mission Valley, and can be used to reach Petco Park via the 12th and Imperial Station, a major transfer point that serves all three lines. Consider buying a one-day pass for $5 (the same cost as two one-way fares) to avoid the rush of fans trying to buy fares after the game.

Drivers can access downtown San Diego via State Route 163 aka the Cabrillo Freeway, which turns into Tenth Avenue and leads directly to the ballpark’s doorstep. You can find more detailed driving directions here. Once there, you’ll find a number of nearby lots — some of them are permit-only but others are open to the general public.

The build-up: Things to do around Petco Park

The options for pregame merriment around Petco Park are nearly endless, with blocks upon blocks of restaurants, bars and shops nearby, suited for nearly every age group, taste and budget. With development ongoing in the area, new options pop up all the time, so if you have some time before first pitch, do take a little stroll around the area and check out everything there is to offer.

Fifth Street in the Gaslamp Quarter is generally regarded as the center of nightlife in downtown San Diego, but there are a number of options closer to the ballpark. Try walking along J Street just north of Petco Park for a good selection of food spots and bars, which on more well-attended gamedays can be teeming with fans and partiers alike.

Restaurants catering to Padres fans are scattered throughout the area as well, particularly between the stadium and the convention center as well as the blocks stretching northward toward Horton Plaza. If you’re hungry, try to find some San Diego-specific eats, such as fish tacos, carne asada fries and California burritos. Or, just wait to head inside Petco Park, where you’ll be able to find all those food items and more.

The ambiance: Watching a game at Petco Park

Petco Park tries very hard — perhaps a little too hard — to be architecturally interesting, and thus walking around, finding your seating area and all that at the Padres’ stadium can actually be more of a challenge than the average baseball fan bargains for.

Getting to the main concourse requires a walk up steps from some gates but not from others; random columns, stairs and ramps make for windy walks through some sections; you have to find pedestrian bridges to get to some areas in the upper concourse; and there are random breaks in the seating bowl in various spots on both main tiers.

Put aside logistics for a second, though, and Petco is really a beautiful facility — and its quirks only lend to that beauty. The most obvious feature worth mentioning is the Western Metal Supply Building in left field — an actual old office building that, instead of being torn down to make way for the park, was left standing and incorporated into the venue’s design.

The building houses the Padres team store and includes party suites, including one on the rooftop, and one of its corners serves as a de facto foul pole in left field. You can walk through it on the main concourse, and it feels a little bit like walking through a Disneyland prop. But how many other ballparks can you do that at?

Then there’s the giant patch of green space behind the batter’s eye in center field that, yes, is an actual park. Formerly known as Park in the Park, it was rebranded as Gallagher Square in 2019.

Fans buy cheap tickets to picnic at the park during games (albeit with an obstructed and very distant view of Petco’s field), but at least there’s a big screen displaying the game, lots of space for seating and a number of food and merchandise booths at your disposal. And yes, when there are no Padres games at the stadium, the park is open to the public.

Though Petco Park’s seating bowl can feel huge, views are terrific — both of the field and of the downtown skyline beyond the outfield. One thing to note, though: During the late afternoon, the sun can beat down hard on the upper-deck seats along the first-base side, so consider avoiding those seats unless you’re OK with sunbathing while watching some ball.

By the time you reach your seating area, you might be too full from all the food options available to you at Petco Park. In addition to the usual hot dogs and nachos, check out items such as the tri-tip sandwich from local institution Phil’s BBQ; fish tacos from locally based chain Rubio’s; California burritos (distinguished by the inclusion of fries inside the tortilla); burgers from local surf-themed outlet Hodad’s; and even poke (raw fish served on top of rice). Also, look out for the many booths serving Ballast Point beer, another local favorite. 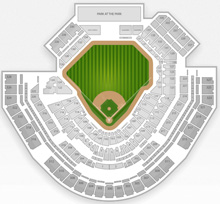