Say this for the venerable Nassau Veterans Memorial Coliseum: It has had, and continues to have, an interesting life as a sports venue. Opened in the early 1970s, it was the only home the New York Islanders knew for more than 40 years and bore witness to the glory days of the franchise — its run of four consecutive Stanley Cups from 1980 to ’83.

For a long time, though, it existed in a sort of sports venue purgatory. Outdated and tiny by arena standards, it seemed destined for the wrecking ball pretty much since the turn of the century — it’s just that Islanders ownership couldn’t figure out the right course of action on how to replace it. Finally, the team announced it would move to Brooklyn and Barclays Center in 2015, and it seemed like that was that for the Coliseum, and maybe hockey on Long Island.

But a funny thing happened to give the old Coliseum new life as an NHL facility: Barclays Center and hockey turned out to be quite a mismatch, and both the venue and the Islanders began looking for ways out of the relationship.

At the same time, the Coliseum underwent a much-needed renovation and received a new “official” name (“NYCB Live at the Nassau Coliseum”), and while the resulting reduced capacity meant it wasn’t a viable long-term solution for the Isles, the upgrade was enough to lure them back on a part-time basis.

Nowadays, the Isles are splitting time between Nassau and Barclays while their long-awaited new arena is being built next to the Belmont Park racetrack, just outside the New York city limits. In the meantime, the magic seems back at the Coliseum, which is roaring again and has its fan base energized. We took time to check it out and found that the smaller crowds do nothing to dampen the atmosphere. 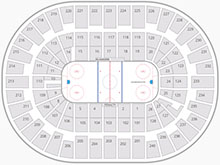