Whether you’re into the NBA, the NHL, mega-concerts, college hoops or anything else that is typically staged in an arena, Madison Square Garden, the home of the New York Knicks and Rangers and so much more, is worth visiting.

You can debate whether it’s “The World’s Most Famous Arena,” as it likes to proclaim, but a LOT of high-profile events take place here, even if the two primary tenants haven’t experienced a whole lot of success over the last 40 years or so. And who can question MSG’s prime location in Manhattan, blocks from Times Square and above one of the nation’s busiest train stations?

MSG got a big boost in 2013 with the completion of a years-long renovation that revamped the seating bowl and added a few unique features, but the aura of a big-time arena remains.

I had the chance to see a run-of-the-mill regular-season Rangers game on a Monday night in December, and I still felt like I was getting to see something big. Not many venues inspire that kind of feeling, but that’s MSG for you.

The approach: Getting to Madison Square Garden

Madison Square Garden is both hard to miss and easy to miss at the same time. Walking down Seventh Avenue from Times Square, you’re not going to overlook the huge marquee that displays upcoming events at the arena. But if you spot that and then look for the arena, you might miss it because a huge office building obscures it — MSG is actually on the other side of that building, and you’d have to walk through what is essentially the office building’s lobby to reach the main entrance.

The aforementioned train station that sits underneath MSG is no small thing, because it means you can reach it from many, many points in and around New York City. Penn Station is served by the New York subway, Amtrak, New Jersey Transit, PATH, Long Island Rail Road and bus lines, and from the station all it takes to get into the Garden is an ascent up an escalator or some stairs. Right outside the station on Seventh Avenue, you can count on finding a gaggle of taxis waiting for fares. Why anyone would drive themselves to a game at MSG is beyond me.

Believe it or not, I was coming by one of the few methods in which Penn Station is inaccessible. For commuters to New York from Connecticut, the Metro North train (run by MTA, the same organization that oversees the subway) is an incredibly convenient mode of transportation, but that service’s entry into Manhattan is Grand Central Terminal, a good mile away. From Grand Central, it’s easy enough to take the subway to Penn Station, but there’s no direct service between the two — you’d have to transfer lines, and to me I figured it was a waste of time to ride the subway a grand total of two stops and have to transfer in between.

So I walked briskly (both to save time and because it was pretty chilly out) and I’d say the walk took a total of 20 minutes each way. So not too bad, and I was super early for the game anyway, so I had plenty of time to hang out outside the arena beforehand.

The build-up: Things to do around Madison Square Garden

C’mon, it’s Manhattan. What can’t you do before a game at MSG? There are any number of places to eat and drink, some right across the street, some a block or two away, and some underneath the arena, inside Penn Station. They range from chains to fast-food joints to independent, cater-to-the-sports-fan places to hot dog, pretzel and halal food carts, and you’d have to go to about a thousand Garden events just to try them all.

Up Seventh Avenue, near Times Square, the choices tend to get a little fancier — you are near Broadway, after all. If you’re a little adventurous and don’t mind straying a few extra blocks away, you could try heading east on 34th Street, where you’ll find any number of Korean BBQ joints, or north on Eighth Avenue to Hell’s Kitchen and its burgeoning number of taverns and eateries.

If you don’t want to eat or drink, you could shop — the world’s largest Macy’s is a block away, and Seventh Avenue between Penn Station and Times Square is filled with the type of kitschy souvenir stores that tourists love. Or you could cram in some more sightseeing — the Empire State Building is just a few blocks away, and of course, there’s Times Square.

For me, though, I was eager to get inside and check out the renovated interior, and as I walked along 33rd Street on my way toward the main entrance that faced Seventh Avenue, there was a guy standing next to an open door to the arena, yelling out, “Rangers game! Enter here! No waiting!” And he was right, no waiting. I got scanned, went through the open door, climbed a flight of steps and was greeted by a smiling ticket-taker. So there’s a nice little insider tip for you.

The ambiance: Watching a game at Madison Square Garden

Start with this: MSG is the only arena I know — definitely the only one I’ve been to — in which you have to go up from street level to reach the event level and seating bowl. Five levels up, in fact, just to reach the event level, which most patrons do by taking one of four series of escalators stationed at each corner of the arena. So in that regard, it really befits the vertical nature of Manhattan, though once you get into the concourses, it feels just like any other arena.

Maybe you’d expect something more flashy out of the interior of “The World’s Most Famous Arena,” but one thing MSG does do well is honor its storied history through displays on its concourses, some including artifacts of the moment in question (Mrs. Fan, a Knicks fan who was not on this visit with me, particularly enjoyed one photo I texted to her). So it’s certainly worth spending some time walking around and looking to see what you’ll find.

It probably beats walking around looking for food, because I found the concessions options rather unimaginative. I’ve found over the last few years that the bar has certainly been raised when it comes to sports venue concessions, and I have no idea what the more high-rolling patrons at MSG have access to, but the offerings I saw — though varied — didn’t inspire me much. Carnegie Deli seemed intriguing, and there was a lobster shrimp roll that caught my eye for a split second until I saw it cost $20, but I eventually settled on a sausage from a stand called Sausage Boss.

The only issue was, I saw this stand (more than once) on the main concourse (that’s Level 6, I believe), and I made the mistake of assuming the same stand would be present two levels up where my seat was. Nope. Faced with the choice of either going back down (and to do that, I would’ve had to take the stairs since all the escalators in the joint were going up pregame) or choosing something else, I settled on a chicken-tenders-and-fries order, and it was just OK. So maybe this is why I look down on the food options, but I suppose like with any joint, you’d have to visit a few times to get a true read on what’s good food-wise.

My seat was in a reasonable spot on the 200 level, about 10 rows from the top, and I got a good look at the Chase Bridge, the most visible feature of the arena’s renovation. The Bridge, from what I can gather, seems like an interesting spot in which to watch a game, kind of like the Monster Seats at Fenway Park, in that you’d have to look almost straight down at the playing surface. When I was perusing tickets for this game, it seemed apparent the Bridge was popular enough, with prices almost double those of the 200 level. The only word of warning: If you buy 200-level seats in at least row 15 and up (along the sidelines, not at the ends), your view of MSG’s fancy high-definition videoboard will be almost completely obscured by the Bridge. There are screens along the Bridge for you to view scores, stats, videos and the like, but to me it’s not the same — almost like viewing the game through a window. You feel a bit isolated from the rest of the arena. It’s definitely a weird feeling.

After the game I noticed there was a lobby above the 200-level seats that fans were streaming to, and I followed them to a narrow staircase, where we descended eight stories to the main entrance level. So the exit was nearly as easy as the entrance, no small feat for such a vertical arena. 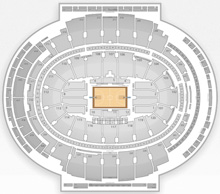