In the new arena game, it can be difficult to come up with a building concept that combines architectural trends and technology to deliver a live sports experience that impresses the increasingly savvy fan. In the case of Detroit’s Little Caesars Arena, the challenge was two-fold: Build a state-of-the-art venue that also honored the history of a storied franchise, the Red Wings, and its previous homes, Joe Louis Arena and the Olympia.

Take in a game at the new building, and you’ll see that they largely succeeded on both counts. The game presentation is second to none, driven largely by the technology incorporated into the arena.

Yet you can also spend a lot of time walking around and taking in all the arena has to offer, including mementos and displays dedicated to the Red Wings and the arena’s other tenant, the Pistons.

For more on visiting Detroit, check out our Detroit city guide.

TBD at Detroit Pistons: Eastern Conference First Round (Home Game 1, If Necessary)
Sunday, April 19, 2020
3:30 am
Get tickets at SeatGeek » 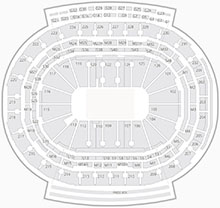