Our guide to Levi’s Stadium in Santa Clara, California, includes information on events, tickets, parking, public transportation, nearby hotels and restaurants, seating and more. Read on to find out how to get the most out of your gameday experience.

Befitting its location in the heart of Silicon Valley, Levi’s Stadium in Santa Clara — home of the San Francisco 49ers and host to some big-time events in its short history — is something of a technological wonder.

More than just a football stadium, the venue tries its best to offer an interactive fan experience, with more to serve patrons than just the ability to watch the game on the field. And its access to top technology firms nearby means that the venue promises to continually be on the cutting edge in innovative improvements to the live sports experience.

More than that, though, Levi’s Stadium has become a go-to spot for some of the sports world’s biggest events. It has already hosted a Super Bowl, an outdoor NHL game and a College Football Playoff championship game, it enjoyed a lengthy run as the home of the Pac-12 championship game (though it is moving to Las Vegas for the 2020 season), and it is home to an annual bowl game (currently known as the Redbox Bowl).

It’s not the perfect football venue — its location and seating arrangements have been cited as drawbacks. And 49ers fans who are sentimental toward the team’s old home, Candlestick Park, have found that the new place doesn’t measure up yet in some areas. The team’s mediocrity over the first few years in the new stadium didn’t help matters. But that changed at the end of the 2019 season when the 49ers played — and won handily — two playoff games on their way to an appearance in Super Bowl LIV.

While the 49ers look to continue the momentum from their recent success, the lineup of events that continue to be played within its confines means that Levi’s Stadium will be high on the must-visit list for many fans.

One memorable moment at Levi’s Stadium

After a prolonged down period, the 49ers finally picked themselves off the mat with a somewhat surprising run to the Super Bowl in 2019-20. They got there with two home wins in the playoffs, including a dominant victory over the Green Bay Packers in the NFC championship.

The approach: Getting to Levi’s Stadium

Despite the fact that Levi’s Stadium’s main occupant continues to carry the San Francisco name, its location is quite far from San Francisco itself. That’s an important distinction that many fans unfamiliar with the Bay Area should understand before visiting.

Santa Clara, where Levi’s Stadium is located, is actually adjacent to San Jose, some 45 minutes by car from San Francisco. U.S. 101, aka the Bayshore Freeway, which connects San Jose and San Francisco, runs near the stadium, as does Interstate 880, aka the Nimitz Freeway, which runs between Oakland and San Jose. For more detailed driving directions, click here.

The stadium shares much of its parking allotment with the nearby Great America amusement park and also utilizes a number of private lots in the vicinity. Great America Parkway is the main north-south route leading from Route 101 to the stadium, and most parking options are close to this avenue. Click here for more on parking at Levi’s Stadium; advance parking passes can be purchased via Ticketmaster.

The South Bay’s light rail transit system, VTA, serves San Jose, Santa Clara and surrounding cities. It has a stop at Levi’s Stadium (actually, it’s named after Great America) and can be accessed from downtown San Jose. Service is typically increased for large-scale events at the stadium, including 49ers games, though there have been difficulties with delays and overcrowding for past events.

The build-up: Things to do around Levi’s Stadium

Aside from Great America (which stays closed on 49ers game days), there isn’t much in the way of entertainment options in Santa Clara near Levi’s Stadium. It’s largely a residential area, and Great America Parkway between 101 and the stadium is lined mostly with office parks.

Note that the lots to the west of the venue are separated from the venue itself by a small creek; you’ll have to find one of three pedestrian bridges to get across, each of which can get rather congested close to kickoff.

There are a handful of hotels nearby (see the hotel list above), and a few chain restaurants (IHOP, In-N-Out Burger) as well. These businesses are there mainly to cater to the neighborhood and office-worker crowd, though they’ve undoubtedly benefited from the presence of the stadium as well.

However, if you’re looking for a more sports-themed atmosphere, or simply desire a greater variety of places to eat, drink or otherwise spend the time before heading to the game, a better bet is likely to spend time in downtown San Jose before hopping on the light rail to the game.

The ambiance: Watching a game at Levi’s Stadium

Levi’s Stadium does its best to straddle the line between humongous and cozy, doing so mainly by employing a design in which the majority of the stadium’s luxury suites are located in a tower on the venue’s west side. So much of the stadium’s general seating is on the first two levels of the seating bowl. However, the highest rows on the upper deck on the east side can feel really high.

One issue that emerged after the stadium’s opening is the fact that, for afternoon football games, the seats on the east side were completely exposed to the sun, causing fans to stay out of their seats for large portions of games. The 49ers, so far, have balked at the idea of building an overhang to shade at least some of the stands, citing FAA regulations considering San Jose International Airport is nearby.

Meanwhile, many longtime 49ers fans have expressed an unfavorable view of Levi’s Stadium when compared with its predecessor, Candlestick Park, citing problems such as a corporate atmosphere and ticketing and tailgating restrictions.

For the visitor, it’s best to focus on what Levi’s Stadium can offer to the fan during events, the most prominent being its embrace of technology. Fans can download an app to order food items (which can then be delivered to their seat for a small fee), find a parking space and keep track of game stats; it was one of the first venues to offer wi-fi throughout the stadium and cardless pay options; and the in-stadium museum features augmented reality and other high-tech exhibits. 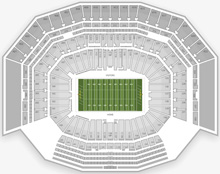