Much like the program that calls it home, LaVell Edwards Stadium can be described as a diamond in the college football rough. Located on the Brigham Young University campus in the heart of Provo, Utah, the stadium offers a perfectly functional home for the BYU football program and a solid, if not flashy, football-watching experience — and a terrific view of the Wasatch Mountains in the distance as well.

BYU, a football independent in the Bowl Subdivision, can draw some big-name opponents to Provo from time to time, and when the Cougars are playing well, the buzz can be felt throughout Provo and beyond.

Of course, the program has a rich history that includes a national title and a number of football greats, such as Steve Young, Jim McMahon, Ty Detmer and more. For a long time, BYU’s program was steered by the stadium’s current namesake, LaVell Edwards, who was at the helm during the charmed championship season of 1984.

The game experience in itself makes Edwards Stadium worth a visit, from the stadium views to the genteel atmosphere created by one of the most polite fan bases in all of college football (more on that later), which helps form a unique sports travel experience.

The approach: Getting to LaVell Edwards Stadium

Provo is about 50 miles south of Salt Lake City along Interstate 15, and travelers under the impression that the city is a middle-of-nowhere college town will be in for a surprise just by making the drive south.

The I-15 corridor is well-traveled and well-populated, and cities like Lehi and Orem aren’t just burgeoning suburbs of Salt Lake City but thriving towns in their own right thanks to a number of tech companies calling the area home — in fact, the region has gained its own catchy nickname, the “Silicon Slopes.”

Salt Lake City International Airport remains the primary entry point for travelers, and from there it’s best to rent a car and drive to Provo, then spend the night before game day in one of the city’s many hotels. I-15, of course, gets plenty congested in the hours before kickoff, as do the main streets leading toward the BYU campus, so if you’re from out of town, walking to the game is your best bet.

Several major hotels can be found near campus and in Provo’s downtown area, about a mile south of the stadium. But if you find yourself staying outside this range, be forewarned that parking is at a premium and most of the spaces within close proximity are reserved for permit holders.

There are public transit options, though. The Utah Valley Express bus line runs free special-event service between Orem and Provo, with multiple stops north and south of campus. And if you’re in Salt Lake City and would prefer not to drive, the FrontRunner commuter train runs from Salt Lake to Provo and offers service every hour on BYU football Saturdays.

The build-up: Things to do around LaVell Edwards Stadium

The BYU campus is surrounded by strip malls, drugstores, grocery stores and other businesses catering to the college kid, and just about every major fast-food chain has a restaurant close by.

If you’re looking for something more sophisticated, head downtown for a vibrant restaurant scene that many local and visiting fans alike will frequent. If you’re in town for an early-season game, check out the Provo Farmers Market, held along Center Street on Saturdays between June and October.

At the stadium itself, you can spend your pregame time at “Cougar Canyon,” along Canyon Road just west of the stadium. This street is closed off to traffic and includes live music, food trucks and sponsor booths.

One thing you won’t find much of: bars. This is Mormon country, of course, and while the population is good-natured, they take their religion pretty seriously around here. Some local restaurants will have alcohol on the menu, but don’t count on finding a rowdy sports bar or watering hole anywhere.

The ambiance: Watching a game at LaVell Edwards Stadium

If you arrive at LaVell Edwards Stadium intending to root for the visiting team, you’ll quickly get a sense of how different the fan experience is just by interacting with a few BYU football fans. Smack talk is almost nonexistent — instead, you’ll get sincere inquiries about how your team is doing, you’ll be thanked for making the trip to Provo, and some people will even say your school’s motto or catchphrase!

There are other subtle differences to watching a game here. For one, there are no metal detectors at the gates, though they will check your bags. You’re also not allowed to bring in full-but-unopened water bottles, but you can bring in empty ones (which, if it’s a hot day like the day we visited, you’ll be glad you did — more on that below). Click here for more on stadium policies.

The concourses aren’t pretty by any means, but there are plenty of concession stands and food choices. Of note: The BYU Creamery stands, which sell ice cream made on campus, and the Cougar Tail, a footlong, maple-frosted donut. While the built-in concession stands sell the typical stadium staples — hot dogs, popcorn and the like — look out for specialty carts throughout the concourses that offer barbecue, loaded hot dogs, Korean BBQ bowls and more.

You’ll also notice plenty of water refilling stations, which is why so many fans in the know carry empty water bottles in. Of course, the hotter the day is, the longer the lines are for the stations, but at least the water is free.

There are few frills in the seating areas, made up of aluminum benches. BYU students and the band occupy the south end zone, while visiting fans take up the northwest corner of the bleachers (sections 121-123), above the tunnel where the road team enters and exits the field. If it’s a day game, there is precious little relief from the sun, except in the late afternoon when the sun begins to set behind the press/suite tower on the stadium’s west side. 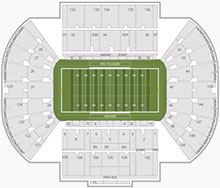