The Chicago White Sox are the polar opposites of their intracity rivals, the Cubs, in many ways, and you can count their stadiums among the reasons why. While Wrigley Field gets lauded (and rightfully so) for being an old-timey, brick-and-steel structure nestled in a trendy neighborhood, the White Sox’s Guaranteed Rate Field is a concrete stadium in a far less vibrant area, lacking both the history and charm that makes Wrigley so celebrated.

And don’t get us started on the name changes. What once was the second coming of Comiskey Park gave in to corporate naming rights and became U.S. Cellular Field, and then Guaranteed Rate Field in 2016 to the chagrin of many.

Other than the name, blame circumstance for the yard’s lack of charisma — it was constructed just before asymmetrical, retro ballparks became all the rage, dooming it to become a concrete relic even before it could celebrate a decade of existence.

Still, watching a game at Guaranteed Rate Field isn’t all bad. South Siders, like their team, are rarely about flash and gimmicks — with them, what you see is what you get. As long as you’re not all about fancy bells and whistles, you’ll be able to enjoy a night at this ballpark as much as any other in the majors.

For more on visiting Chicago, check out our Chicago city guide. 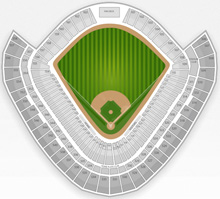