Our guide to Gila River Arena in Glendale, Arizona, home of the Arizona Coyotes, includes information on events, tickets, parking, public transportation, nearby hotels and restaurants, seating and more. Read on to find out how to get the most out of your gameday experience.

You might think that hockey is a curious event to find in the Valley of the Sun, but then you step into Gila River Arena and realize that the Phoenix area really does care about the sport.

After all, the Arizona Coyotes have been around for 25 years, having moved from Winnipeg in the mid-1990s, and despite enjoying only a few fleeting moments of success during that time, the franchise has established itself in the community and the game has taken root, with rinks around the region.

Gila River Arena, located in the Phoenix suburb of Glendale, is a fine place to watch hockey in the desert, and has been improved in recent years with the addition of things like a larger videoboard. It’s certainly an improvement over the Coyotes’ original home in Arizona, the former America West Arena (now Talking Stick Resort Arena), which was ill-equipped for hockey and offered thousands of obstructed-view seats.

Clearly, many fans do love coming to Arizona to see hockey, judging by the many opposition jerseys visible in the stands almost regardless of who the Coyotes are playing. That part of it is a shame, but the Coyotes do have a loyal fan base, and they have a pretty nice arena in which to watch their team play.

Gila River Arena lies in the center of a shopping and entertainment district that includes the Cardinals’ State Farm Stadium, and has become a focal point for large-scale events such as concerts in the West Valley. And when it’s a Coyotes game night, the folks there do go to great lengths to make all hockey fans feel welcome, whether you’re rooting for the home team or not.

For more on visiting Glendale, Arizona, check out our Phoenix sports travel guide.

Since arriving in Phoenix, the Coyotes have advanced out of the first round of the Stanley Cup playoffs once, reaching the Western Conference finals in 2012. But as for memorable moments … how about a goalie goal? Longtime Coyotes goalie Mike Smith achieved the feat on Oct. 19, 2013, at Gila River Arena.

The approach: Getting to Gila River Arena

Glendale isn’t close to downtown Phoenix, which is one of the drawbacks of the facility. But in the ever-burgeoning Valley of the Sun, there’s more and more to do in more and more far-flung places that are worth driving to, so in the grand scheme of things it’s not THAT far away.

Generally, from downtown you’re looking at a 15-20 minute drive without traffic, and tack on 5-10 minutes if you’re coming straight from Sky Harbor Airport, on the east side of downtown. The route is simple enough — take Interstate 10 west to Loop 101 north, and proceed about 6-7 miles to either Bethany Home Road, on the arena’s south side, or Glendale Avenue, to the north.

Once you’re there, you’ve reached the sprawling Westgate Entertainment District and a rather interesting parking situation. There are plenty of signs directing you to “Coyotes Parking” and signs telling you what to do if you’ve got a color-coded permit (which, if you’re a visitor, you probably don’t). But unlike most places where you expect to eventually reach a parking attendant taking money, this never happens here. You’re directed to a common lot that other Westgate patrons use, and you park. Yes, for free.

I don’t know for sure, but I have to think this is a serious hindrance to the Coyotes’ financial situation. What sports franchise doesn’t reap a significant amount of revenue from game parking fees? But how can they charge, when there are other folks coming to the complex who aren’t going to the game and just want to get ice cream or whatever — you don’t want to discourage them from coming on game nights. And even though there are paid lots close to the arena, the smart fans will just park a little farther away for free and walk. It really is a conundrum, one I’m not sure has a good solution.

If you just hate driving and parking, public transportation isn’t really an option unless you like doing a lot of transferring. Phoenix’s Valley Metro Rail doesn’t come close to Glendale, and from the westernmost stop you’ll have to ride the bus up to Westgate. It’s doable but not very practical. If your main reason for visiting Phoenix is to see hockey and you don’t have a car at your disposal, consider staying at one of the many hotels nearby to Westgate, including a Renaissance right next door to the arena, and just taking a cab back and forth from the airport.

The build-up: Things to do around Gila River Arena

The Westgate Entertainment District has an impressive number of restaurants and bars, including a few literally next to the arena’s main gate. It also has some retail (including a large sports souvenir shop), a big movie theater, a giant fountain/park area (especially popular with the kids) and townhomes. Go a little farther out, and you’ll find even more restaurants, shops and hotels.

So you really could spend all day at the complex waiting for your game to start and hanging out after it, and if you’re doing that you’re likely spending more than enough money to justify getting that free parking space. (Wonder if the Coyotes get a cut of some of that money? Probably not.)

If you are walking through the main entertainment complex on your way to Gila River Arena, it is pretty cool to see fans spilling out of the nearby restaurants, hanging out next to the fountains, checking out events at the plaza and engaging in other general merriment before going inside. It makes for a nice atmosphere, and the Coyotes do their part by putting up giant inflatable Coyote players and staging youth street hockey games.

The ambiance: Watching a game at Gila River Arena

Once you step inside (and happily out of the heat, depending on the time of year you’re visiting), Gila River Arena offers everything you’d expect in a modern arena, with ample seating and room to move around. It’s big but not huge, and with a fair amount of concessions choices but not overwhelmingly so.

One distinct design feature of Gila River Arena: The upper concourse is above the upper seating level, so fans in that level can walk down to their seats — and it also creates standing-room viewing points as well as opportunities for patrons going to the bathroom or getting food to still keep an eye on the action during their event.

The food options you have range from the typical hot dogs, chicken tenders and the like to Mexican food, deli sandwiches and sausages. Perhaps in an effort to appease the Canadian snowbirds that undoubtedly drop in on games, poutine can also be found. Sadly, another Canadian export, Tim Hortons, no longer has a presence after being available for several years.

While the Coyotes work to improve their product on the ice, they already do a terrific job with game presentation at the arena — something that was enhanced for the 2018-19 season with the addition of a new HD videoboard at center ice.

During a game at Gila River Arena, expect to hear a lot of coyote howls echoing through the seating bowl — such as when the home team scores, of course (along with the team’s very appropriate choice of goal song, “Howlin’ For You” by the Black Keys), and when it goes on a power play. 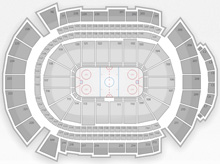