To replace the outdated Bradley Center, the Milwaukee Bucks came up with one of the more unique fan experiences in the NBA. Both outside and inside, Fiserv Forum has plenty to offer for both diehard Bucks fans and visitors to the city.

Not surprisingly, the arena quickly became a popular place, both for the newness of it all as well as the fact that its opening coincided with a rising Bucks team that had championship aspirations.

Surrounding development is helping make the arena a destination as well — though its downtown location and ease of access already helped in that regard.

Residents of Milwaukee already loved their hoops — both the Bucks and the major college program, Marquette, have enjoyed plenty of success and past championships. The opening of Fiserv Forum has given them a state-of-the-art facility at which to practice their devotion.

Upcoming Events
All times local
An Evening with Michael Buble in Concert
Saturday, March 28, 2020
8:00 pm
Get tickets at SeatGeek » 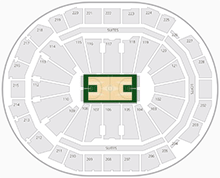