Citizens Bank Park is part of the famed cluster of venues known as the Sports Complex in South Philadelphia, and also the newest of the three stadiums that stand there. Built in 2004 to house the Phillies, it stands across the street from Lincoln Financial Field (home of the Eagles) and the Wells Fargo Center (home of the Flyers and 76ers), near the intersection of Broad and Pattison streets that carries so much significance for so many Philly sports fans.

It wouldn’t have taken much for Citizens Bank Park to be an upgrade over the Phillies’ previous home, the often-derided Veterans Stadium, but in its 15-some years of existence, the new place has settled in nicely among the destination ballparks of the major leagues. From the lively Ashburn Alley to the Liberty Bell home run/victory display, the venue boasts its fair share of unique features.

And the home team has done its part in making memories for its fans. First and foremost was the 2008 World Series title, part of a run of dominance that included five straight division titles and two trips to the Fall Classic.

After some down seasons, the Phillies look primed to become part of MLB’s elite once again, and they’re also promising to make Citizens Bank Park one of the most happening spots in the majors as well. 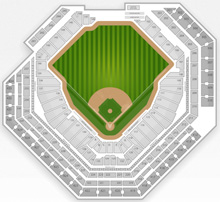