There’s a certain charm, a certain personality, to attending a game at Citi Field. From the architectural echoes of Ebbets Field to the planes flying overhead after takeoff from nearby LaGuardia Airport, the game experience at the home of the New York Mets is unique in a lot of ways.

While the ballpark’s location deep in the heart of Queens can make it a challenge to visit for the average New York tourist, it’s worth a ride on the 7 train to see what Citi Field is like. Once you get there, you’ll find plenty of fan comforts and a few surprises.

Mets’ fans opinions of their team’s home were largely negative early on, but have gradually improved thanks to various improvements over Citi Field’s first decade of existence. But there’s no denying the park is a vast improvement over the team’s old and decaying home, Shea Stadium.

The team and city had explored ways to replace the old Shea for years, at one point considering building a ballpark in Manhattan, before finally clearing the hurdles to build the new place on the same site.

Citi Field has seen a few highlights in the first 10 years, having hosted the MLB All-Star Game (in 2013) and the World Series (in 2015), as well as international soccer matches, the NHL Winter Classic and more. 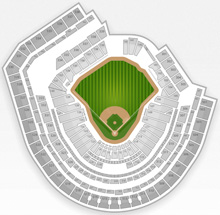