The area of Washington, D.C., known as the Penn Quarter, between the U.S. Capitol and the White House, is a hub of entertainment and nightlife — full of trendy restaurants and bars. At the center of it all is Capital One Arena, the home of the NHL’s Capitals and NBA’s Wizards.

It’s hard to dispute the argument that the arena, which began life as the MCI Center in 1997, is the reason for all there is to do nearby. The area was downtrodden and struggling beforehand; now, it’s a hotspot for locals and tourists alike.

The profile of the neighborhood only goes up when Capital One Arena’s tenants are doing well. Witness the spring of 2018, when throngs gathered outside the building to watch Capitals road games during the Stanley Cup Final — including the Cup-clinching Game 5.

With the Capitals and Wizards, the Georgetown men’s basketball team and a robust concert schedule, there’s something happening at COA most nights, and plenty of reasons to visit the building and the vibrant neighborhood surrounding it.

For more on visiting Washington, D.C., check out our Washington city guide.

The approach: Getting to Capital One Arena

Considering its central location, you’d think Capital One Arena would be easy to reach via public transportation, and you’d be right. The Gallery Place/Chinatown station of the Washington Metro subway system is directly underneath, and it serves as a transfer point for three different lines. If your starting point is within the District, the Metro is by far the most cost-effective and timely way to get to the arena.

For those coming from the suburbs in either Maryland or Virginia, commuter rail services are offered via MARC (in Maryland) or VRE (in Virginia). Both offer service to Washington’s Union Station, from which riders can travel two stops on the Metro Red Line to Capital One Arena.

Driving to the game presents some difficulties, not just in the challenge of finding parking within a dense downtown neighborhood. For the uninitiated, Washington’s street grid is notoriously confusing and most locals will avoid driving into central D.C. as much as they can. For detailed driving directions to the arena, click here.

The build-up: Things to do around Capital One Arena

The possibilities are endless for pre- and postgame fun, really, limited only by your time and budget. Some of Washington’s major tourist attractions are within reasonable walking distance, starting with the National Portrait Gallery across the street and continuing with places such as Ford’s Theatre, the International Spy Museum, the Museum of Crime and Punishment and more.

Still other attractions are a short subway ride away, including the Capitol, the White House, the National Mall and the Smithsonian museums, the Lincoln Memorial, and on and on. Consult our Washington city guide for a deeper dive into all there is to see.

As the event gets closer, there’s much to do in the immediate vicinity of the arena. Look to 7th Street and the blocks just west for many of the food and drink options, ranging from well-known chains such as Legal Sea Foods, Shake Shack and Bar Louie to independent and local favorites. Click here for a guide to area restaurants and bars.

If your culinary tastes are a little more adventurous, venture a few blocks northeast of the arena, where the city’s Chinatown lies and a number of acclaimed Asian eateries are there for sampling. You can find a guide to Chinatown restaurants here.

The ambiance: Watching a game at Capital One Arena

Capital One Arena was part of a wave of 1990s construction that saw a number of new arenas built for NBA and NHL teams across the country, and from an architectural and aesthetic standpoint, there isn’t much that sets this facility apart from the others built during this period.

The exterior, adorned with lighted billboards, livens up the surrounding area and wouldn’t look out of place in New York City; the interior is clean and modern but corridors are narrow in some spots, and the seating bowl is the pretty standard upper-and-lower-bowl structure, with a club/suite level in between.

The upper level, also known as the 400 level, doesn’t feel too far removed from the action, and the viewing experience is enhanced by an HD videoboard and ribbon boards. Also, the arena recently fixed a running issue for patrons in that level, installing seats with larger cupholders.

Food offerings had been surprisingly standard, with generic offerings far outnumbering specialty stands and brand names, but that has started to change. Among the additions is a stand, Fuku, operated by celebrity chef David Chang. Chick-Fil-A, Rita’s Italian Ice and Dunkin’ Donuts do have a presence at the arena as well, and the selection of cocktails and beer has improved in recent years as well.

Technological advances have also come to the arena, with the introduction of pour-your-own-beer stands and self-ordering kiosks. 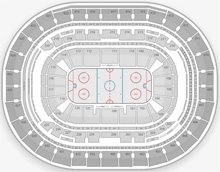