In Miami’s vibrant sports scene, AmericanAirlines Arena might be its most interesting venue. It’s got a lot going for it — a prime location downtown, right alongside Biscayne Bay (meaning it’s the closest sports venue to Miami Beach); a sleek, beautiful facility; and a prime tenant in the Miami Heat that for the last several years has been the hottest ticket in town (though the team has lost two of its biggest names over the years).

The Heat, which has won three titles in its first 25 years of existence and is responsible for bringing a number of star players into the Miami spotlight, undoubtedly occupies a marquee spot in South Florida’s consciousness — indeed, only the Dolphins rival the Heat’s popularity among local sports fans.

The Heat really are Miami’s glamour team, and in good times or bad, you can expect the AAA to be filled whenever the Heat are home.

I visited at the tail end of a down season with South Florida pal Backstage Girl, and the fans sure seemed as boisterous as they were during the best of times here.

For more on visiting Miami, check out our Miami city guide.

The approach: Getting to AmericanAirlines Arena

Because AmericanAirlines Arena (and yes, the space between “American” and “Airlines” is missing on purpose, a branding thing that sets the arena apart considering American Airlines has purchased naming rights to at least one other prominent sports venue in the U.S.) occupies such a prime piece of land, there are disadvantages in trying to get there — namely traffic.

And it almost doesn’t matter what day or time you’re headed there, because between the 9-to-5 commuters and the tourists going to and from the beach, the area is full of vehicles at nearly all waking hours.

Interstate 95 runs several blocks west of Biscayne Boulevard, the main thoroughfare on which the arena is located, and I-395, north of the arena, offers access via the Biscayne Boulevard exit. Once you’ve found the arena, your next challenge is finding parking — your primary choices are city-owned and private lots scattered around the surrounding blocks. The closest option is the Bayside Marketplace, a bayfront shopping center just south of the arena.

If you don’t want to drive — I wouldn’t blame you if you didn’t — and you’re already in Miami proper, you have public transportation options. The city’s Metrorail service operates through downtown; the Overtown/Arena station is five blocks away.

Want to get a little closer? Then get off Metrorail at Government Center and transfer to the Metromover, an automated train system with three lines that wind through downtown. Get on an Omni Loop train and exit at Freedom Tower, one block from the arena. (The Metromover system in particular can be confusing, though, so be sure to study a map to be sure you know where you’re headed.)

The build-up: Things to do around AmericanAirlines Arena

It being downtown, you don’t have to stray too far from the arena to find places to hang out before tipoff. The aforementioned Bayside Marketplace contains more than a few places to eat and drink, including chains like Bubba Gump and Five Guys as well as an outdoor daiquiri bar.

The blocks immediately north and west of the arena have a smattering of sports bars and restaurants as well, and also the occasional nightclub if you feel like getting your groove on once the game is over.

If you don’t mind the traffic getting across Biscayne Bay, Miami Beach is an option, too. Hang out on a restaurant patio, rent a bike and ride it along the beach or just cruise down Ocean Avenue and people-watch. Hey, there aren’t too many NBA arenas around which you can do those sorts of things pregame, so you might as well take advantage of it. Just allow yourself plenty of time to get back lest you miss tipoff.

The ambiance: Watching a game at AmericanAirlines Arena

Once you’re inside the seating bowl, AmericanAirlines Arena is all about the experience of watching basketball. That goes without saying, right? After all, it is primarily a basketball arena. But spend enough time in Miami and you’ll see that they do the entertainment and nightclub scene very well, and though the game is clearly the most important thing, of course, the arena offers plenty of flash as well.

For example, the building takes advantage of its picturesque location by having a plaza on the east side that overlooks the bay and includes standing tables, lamps and the like so that fans can gather and mingle while holding a drink the same way you would if you were attending a sophisticated mixer.

Though it’s on the opposite side from the main entrance facing Biscayne Boulevard, you’ll find it to your advantage to check it out anyway, and here’s why — the west entrances tend to get jammed up with fans waiting to enter, but few seem to realize that there are three whole other sides to the arena. I walked around the building’s south side and found an entrance with nobody around except for bored ticket-takers chatting with each other. No wait whatsoever and they looked happy to see me, as though they had just been discovered.

Inside, you’re greeted with bright and airy concourses and lots of food and drink options, so do spend some time walking around surveying your options. As befitting Miami, you’ll find a lot of Latin food choices, such as the Cuban sandwich, and the BBQ and fried chicken stands were tempting as well.

Eventually i settled on something called a pincho — essentially a Latin version of a kebab, with meat and vegetables on a skewer served on top of a bed of rice. Definitely a messy and difficult thing to be eating at your seat, and for $15 it’s a little pricey. But darned if it wasn’t worth it.

As a basketball-only arena, the sight lines are terrific. I had seats 25 rows up from the court behind one of the baskets, and Backstage Girl joined me a few minutes after tipoff after arriving from work. We could see all the action just fine, as well as everything worth seeing off the court, including the Heat’s three championship banners (which were practically directly above us), the strange-but-artsy center-hung scoreboard (which changes colors and is designed to resemble a sea anemone, apparently) and two curious jerseys hanging above the upper deck (click the link for the spoiler).

Upcoming Events
All times local
Justin Bieber with Kehlani and Jaden Smith
Tuesday, July 21, 2020
3:30 am
Get tickets at SeatGeek »

Omarion with Bow Wow and Ying Yang Twins and Soulja Boy and The Millenium
Friday, July 31, 2020
8:00 pm
Get tickets at SeatGeek » 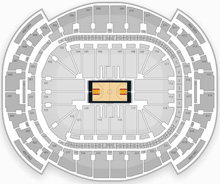